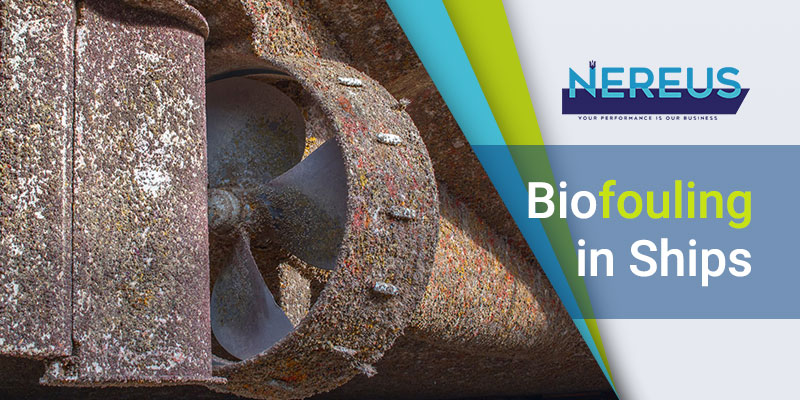 The underwater ecosystem is quite different from the land, in many ways, but there are some similarities between the two. For instance, let us consider a car parked under a tree. Over the period of a few days, the car will gather a coating of dust and leaves, if you do not clean it regularly. Over a period of weeks, and then months, the car will be completely covered in grime, making it difficult to use. Dust may even go into the engine and inside the car, making it unsuitable for driving. This same scenario occurs with sea-faring vessels or ships. If a ship’s hull and underwater portions are not cleaned regularly, these areas, which are submerged under water, will develop a coat of slime and marine life, also known as biofouling.

Types of Bio-Fouling on Underwater section of Ship’s hull

What is biofouling in the marine environment?

Biofouling or biological fouling refers to the consistent accumulation of underwater life, like microorganisms, plants, algae, or small animals, on the ship’s surface. These biofilms can even reach parts of the ship like the water inlets, pipework, and grates, and these can affect a ship when she has a long stay at anchorages or moving in a water body. In the marine environment, biofouling can occur almost anywhere, making it an imperative part of the vessel’s journey. Given its tenacious nature, biofouling is impossible to avoid and the only option at hand is to control the impact through regular maintenance and cleaning activities.

What problems does biofouling cause?

Marine fouling is the accumulation of micro-and macro-organisms on immersed surfaces which lead to economic, environmental or safety-related negative effects. Marine fouling generates surface roughness which increases the drag resistance of a ship moving through water and consequently increases fuel consumption and emission of greenhouse gases. Heavy calcareous fouling may result in powering penalties of more than 85%. Moreover, even slime films can lead to significant increases in resistance and powering (Approximately 20%). Another effect of marine fouling is the deterioration of coatings such as favored corrosion. Settlement of fouling generates an increase of the frequency of dry-docking operations additional coating replacement or hull repair which is very costly for ship owners.

How does biofouling affect the shipping industry?

The problems we discussed earlier are stated in consideration of a single ship. However, when considering the entire shipping industry, the problems concerning a single vessel become greatly magnified. For instance, the additional 40% fuel being consumed by one ship transforms into a humungous loss when looking at the entire industry. The industry loses on profitability and efficiency, leading to several drastic problems. Separately, the increased fuel consumption also leads to adverse environmental effects, with the energy burning resulting in higher amounts of carbon dioxide and sulphur dioxide being released into the air. Therefore, biofouling is a huge cause of concern for the shipping industry, in terms of both low profitability and extreme environmental degradation.

There is no contesting the fact that biofouling is a huge problem for the shipping industry, as a whole. In this scenario, it is imperative that the industry consider methods to lower this impact and ensure efficiency and profitability. Given the hardships caused by biofouling, many researchers have studied the issue looking for suitable solutions.

One of the best and simplest way of combating the negative effects of biofouling is to employ the services of a professional and experienced maritime solutions provider like Nereus Subsea. With our team of expert professionals, we help you clean biofouling simply and seamlessly, ensuing optimal performance and minimal fuel consumption. In addition, ship owners must also consider using anti-fouling coating to combat biofouling on a daily basis. Since some anti-fouling substances can leak into the water and irreversibly damage marine life, it is better to use hydrophobic foul-release coatings, copper-free anti-fouling paints, and nano antifouling coatings. These anti-fouling options make the surface of the ship slippery, ensuring that marine life cannot stick to the hull, thus avoiding biofouling successfully.

Biofouling is a problem that has affected the shipping industry since ages but now we have the means and methods necessary to combat the pressing issue and ensure sustainable profitability.